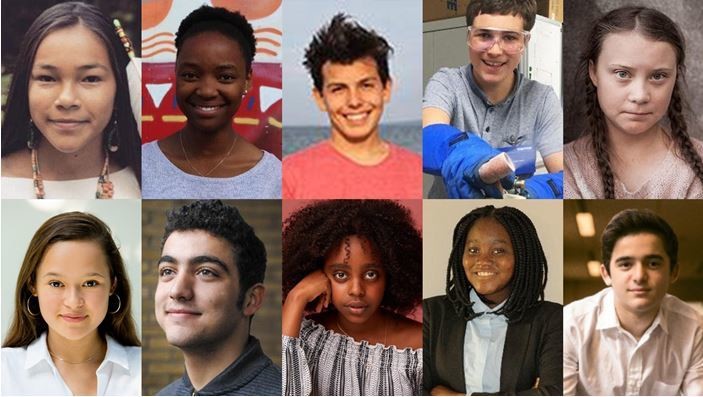 Greta Thunberg is part of a young generation fighting to change the world.
For the first time ever, a group of teenage change-makers will take part in Davos.
From fighting gun violence to climate change, their voices must be heard.
From tackling the climate crisis to fighting discrimination, young people worldwide are taking their futures into their own hands.

The planet’s future is their future, so it’s more important than ever to give them a platform for their voices to be heard.

For the first time in its history, the World Economic Forum will welcome teenage change-makers to the Annual Meeting in Davos-Klosters to boost collaboration between the generations. Here are 10 of them…

Canadian Autumn is an Eagle Clan Anishinaabekwe from the Wiikwemkoong First Nation in Northern Ontario. She has been a “water warrior” since the age of 8, ever since she learned of First Nation communities that couldn’t drink their water due to contamination from industrial activity and oil pipelines. In 2019, Autumn was named the Chief Water Commissioner by the Anishinabek Nation, representing 40 First Nations in Ontario, many of whom lack clean drinking water. In her role, she visits reserves, meets with leaders of the Anishinabek Nation and speaks internationally about indigenous and water rights.

Ayakha lives in the village of Eerste River on the outskirts of Cape Town, South Africa. Her mother works as a farmer in the Western Cape, where droughts and severe water shortages have threatened her livelihood. These changes prompted Ayakha to act. As part of the African Climate Alliance and the Project 90 by 2030 initiative, Ayakha is mobilizing support for low-carbon development and a just energy transition in her country. In 2019, Ayakha and 15 other children around the world submitted a petition to the UN Committee on the Rights of the Child to hold five of the world’s leading economic powers accountable for inaction on the climate crisis.

Now based in New Zealand, Cruz was born and raised in Bali and has spent a lot of time diving and exploring eastern Indonesia with his family. He fell in love with the ocean from an early age, thanks to his parents, who work as marine conservationists. Cruz has logged more than 160 dives since the age of 10 and has been shooting underwater photographs since he was 12. In 2019, Cruz’s nighttime photograph of a Bigfin reef squid won him the prestigious title of Young Wildlife Photographer of the Year by London’s Natural History Museum.

Fionn grew up on a remote island in West Cork, a seaside region in southern Ireland. Fionn spent his childhood creating science projects and paddling around the coasts of Ireland with his kayak. Through his passion for the outdoors, he witnessed the effects of microplastic pollution on the environment. When Fionn was in high school, he invented a new method of extracting microplastics from the water using his own version of ferrofluid, a liquid developed by NASA. Fionn introduced the concept at the 2019 Google Science Fair, where he won the competition for his methodology to remove microplastics from water.

When Greta was 8 years old, she watched a documentary in school on something called climate change. Once Greta understood the climate crisis, she could not “un-understand” it – she stopped eating, she stopped speaking and she fell into depression. Eventually, Greta sought all the information she could about climate change and its causes and began changing her own habits to lessen her carbon footprint. In 2018, she began protesting outside the Swedish parliament during school hours with a sign painted with the words, “Skolstrejk for Klimatet” (“School Strike for Climate”). Greta has continued to strike every Friday, inspiring hundreds of thousands of children worldwide to follow her example.

Melati grew up on the island of Bali, where she encountered a plastic epidemic. Swimming in the seas just off her childhood beach, Melati recalls emerging from the ocean with a plastic bag wrapped around her arm. Inspired by a school lesson on influential world leaders, Melati founded “Bye Bye Plastic Bags” with her younger sister to organize petitions, awareness-raising campaigns and massive beach clean-ups. Since then, Bali has announced a law banning single-use plastic, thanks in part to Melati’s efforts. Melati and her sister were part of TIME Magazine’s Most Influential Teens and CNN’s Young Wonders in 2018.

Climate activists, Isabelle Axelsson and Loukina Tille, who have worked with Greta Thunberg to organize Fridays For Future strikes, will be a part of the cohort of Teenage Change-Makers taking part in the Annual Meeting programme.

Mohamad grew up in Syria, but fled for Lebanon when life became too dangerous at home. Like thousands of other refugee children in the country, he couldn’t go to school, so he set out to support children in the same situation. Together with his family, 12-year old Mohamad built a school in a refugee camp where 200 children now access their right to an education. He helps children to heal, learn and have fun with games and photography. Mohamad was awarded the International Children’s Peace Prize in 2017 and MTV’s Generation Change Award in 2018.

Naomi’s student activism started when she led a walk-out at her elementary school in Virginia to mark the one-month anniversary of the school shooting at Marjory Stoneman High School in Parkland, Florida. Her walk-out was 18 minutes long – 17 minutes for each student and teacher who lost their lives, and another minute for Courtlin Arrrington, an African American student who was murdered shortly after the Parkland shooting in her Alabama high school. Naomi’s mission is to empower African American girls and she hopes more people will join her effort to remember Courtlin and the many African American girls lost to gun violence.

Natasha was born and raised in Zambia, where she advocates for the health and well-being of young people, particularly against child marriage. Through her roles as junior reporter and journalist and as social accountability monitor in various health organizations, she gathers and shares information on women and girls’ rights and tracks stakeholder progress. She also founded the Natasha Mwansa Foundation to promote a world in which young people are heard, valued, and healthy. Through her work, she was selected to be part of the African Union Commission’s Youth Advisory Board and became the youngest recipient of the World Health Organization’s Global Health Leaders Award.

When Hurricane María devastated Puerto Rico in 2017, Salvador was told his community faced the prospect of no power or electricity for at least a year. In response, he created the “Light and Hope for Puerto Rico” campaign to distribute solar-powered lamps, hand-powered washing machines and other supplies to more than 3,100 families on the island. Salvador continues to support the implementation of smart energy systems in Puerto Rico and has launched the “Light and Hope for the Bahamas” humanitarian initiative. Salvador was named one of TIME Magazine’s 30 Most Influential Teens of 2017 and received the President’s Environmental Youth Award from the United States Environmental Protection Agency and the Diana Award for social humanitarian work in 2019.