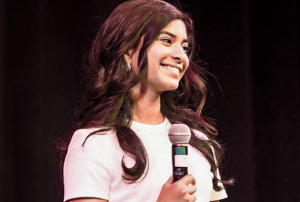 When Riya Karumanchi saw her friend’s visually impaired grandmother struggling to move around her own home, she knew there had to be a better way. The white cane — that simple tool that helps the blind identify obstacles — hadn’t really changed in nearly 100 years. “I thought that was insane,” says the 16-year-old. “Change in tech wasn’t being distributed equally — not just geographically, but community-wise.”

Karumanchi — who taught herself to code in the fourth grade and has participated in youth innovation programs in Toronto for years — talked with the visually impaired community and heard a common refrain: The white cane was great at identifying obstacles on the ground, but users were still vulnerable to things like errant branches and fallen twigs.

She started building a device dubbed SmartCane, using ultrasonic sensors to identify a wide variety of obstacles and alert the user with vibrations; different levels of intensity and placement on the cane help signal just where the obstacle is. A navigation system plots a safe route, while sensors identify other dangers, like wet, slippery sidewalks.

With the help of four part-time employees, Karumanchi has raised $85,000 in funding and in-kind services from companies like Microsoft, Arrow Electronics, and Inertia Engineering. Next up: user testing.

“When you’re creating a device for people within the accessibility community, there’s a saying that goes, ‘Nothing for us without us,’ ” she says. “Input from [the visually impaired] has been so important every step along the way.”

Ideally, SmartCane will hit the market by mid-2020 — just in time for Karumanchi to finish the 11th grade. And while she’s open to the idea of eventually attending college, her ultimate dream is a little loftier: become what she calls a “unicorn person.”

“Instead of [building] a company that has a valuation of a billion dollars, it’s the person that can impact a billion people,” she explains. “It’s ambitious, but that’s my goal.”