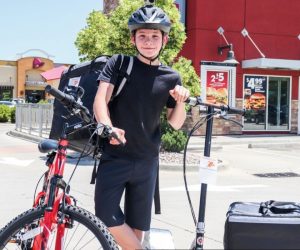 Five years ago, Jack Bonneau desperately wanted the LEGO Star Wars Death Star, which cost $400 — way more than he had in his wallet at the age of 8. So he set up a lemonade stand at his local farmers’ market. “In 12 weeks, I made $900 in profit,” he says. “I never knew anything like that was possible.”

He wanted to make it possible for other kids, too, and launched a one-stop destination for children’s commerce: For a $15 fee, Jack and his dad will help kids in the Denver/Boulder area set up a branded Jack’s Stands & Marketplaces stand. They spend 30 minutes helping to get the operation running for the day and then check back several hours later to review a P&L statement. Over four years, hundreds of kids have operated thousands of these stands around the city.

As he starts his freshman year of high school, Bonneau is transitioning Jack’s Stands to a nonprofit organization; that way, it can partner with larger organizations and grow beyond Colorado, he says. He’s also working on his next big idea: Teen Hustl, an app that gives teens access to the gig economy. “My dad told me that back in the 1980s, millions of teens used to have their own paper routes and babysitting businesses,” Bonneau says. “I was like, Wow! Now, because of the internet, those jobs are being taken by adults. But teens are the most tech-savvy, so why not plug them in to that?”

Teen Hustl will operate as a sort of hyper-local DoorDash or Postmates, serviced exclusively by neighborhood teens making deliveries on bikes or scooters within two to three miles of a store or restaurant. “The big guys focus on serving cities, but there are 24 million teens across America ready to work these untapped markets,” he says. “That’s a big opportunity.”