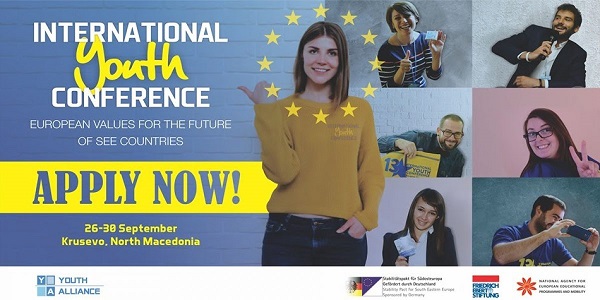 International Youth Conference “European Values for the Future of SEE countries” is at the seventeenth annual conference in 2019. Over the last 16 years, the conference has closely followed the advancement of the SEE region towards European integration. At the 2003 EU-Western Balkans Thessaloniki Summit, the EU declared its ‘unequivocal support’ for the region’s European perspective. While Croatia did become an EU Member State, Albania, Bosnia and Herzegovina (BiH), Republic of North Macedonia, Kosovo, Montenegro and Serbia are still on different phase of their parth towards EU accession: four countries have candidate status; BiH has applied for it; and only Kosovo has not. Since 2003, the European Union has also changed: having had three enlargements (2004, 2007 and 2013) and welcomed 13 new members, it is currently negotiating one departure from its ranks for the first time.

The Prespa agreement, which ended the 30 years long naming dispute with Greece, enabled Republic of North Macedonia to make final step to enter the accession process in NATO and look concretely to the start of the negotiations for accession in EU. Over time, EU approach to enlargement has grown stricter, involving stronger focus on the “fundamentals”: rule of law, economic governance and democratic institutions. The Berlin process, on the other hand, is often highlighted as a trigger of positive dynamics in regional cooperation, most recently with the agreed set up of a regional economic area and a transport community at the Trieste Summit. By making its approach to enlargement stricter, the EU risks to alienate the candidate or aspirant candidate states from the accession process.

Many of the Balkan countries are considered flawed democracy or hybrid regimes, and following the international negative trend, the crisis is speading further in the region. To avoid the risk of reform backlash and demotion of the democratic progress undergone by the SEE countries during the last ten years, the enlargement progress must enter a new stage in which the democratization of the SEE countries is in the focus, in order to make them meet the characteristics required for the EU accession. While the next European elections are approaching in 2019, we believe this is the time to ask ourselves: how to advance effectively in the European integration of the Balkans, and in the Enlargement of European Union? The European young leaders are once again ready to gather to discuss and find new perspectives on the future of the European region.

In order to effectively proceed on the path toward EU accession, the common challenges must be clarified and the dialogue with the European institutions must step forward, also directly approaching the civil society. By establishing a three way conversation, we aim at identifying what the EU could and should do to operate a sustainable European integration of the Balkans, overcoming euroscepticism from the civil society level. According to the Principles of Public administration for EU enlargement, policies and legislation of the candidate states must be designed to enable the active participation of the society. The 17th International Youth Conference will demonstrate the constant support and initiative of the youth field, focusing on the same time on what the Balkans could do for the future of European Union, but especially on what European Union could do for the Balkan young citizens.

58 participants from the countries from the SEE region (North Macedonia (host country), Albania, Bosnia and Herzegovina, Bulgaria, Croatia, Greece, Kosovo, Montenegro, Italy, Romania, Serbia, Slovenia) and Turkey and guests from youth organizations partners from Germany, France and Poland in the role of mentors.

In order to apply, and for more information, please read the official call.